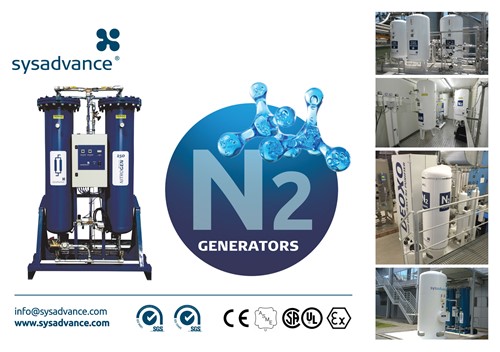 With a global presence in more than 40 countries and highly specialized human resources, the company dedicates its efforts to continuously develop new technologies and improve its products and systems. SYSADVANCE´s commitment to reliability and quality is reflected in more than 2000 units and systems installed, in a vast portfolio of selected multinational clients, sustained its average annual growth rates of 30%.

SYSADVANCE ´s core product is the Nitrogen generator. Incorporating state-of-the-art  proprietary PSA technology. In this process, compressed air, acting both as raw material and energy, is fed to the unit that relies on adsorption phenomena to remove the contaminants: mostly Oxygen, Hydrogen and Carbon dioxide (CO2) are removed, as well as other minor contaminants. The PSA unit contains pairs of columns packed with a selective adsorbent – Carbon Molecular Sieve (CMS) – that has affinity towards the component to be removed – Oxygen. Each column undergoes a cyclic sequence of high and low pressure steps that guarantees the production of a continuous flow of high purity gas. Nitrogen with purities ranging from 95% to 99.999% can be produced by SYSADVANCE Nitrogen PSA’s.

In the past few years, PSA systems have become the general industry standard as source of supply of Nitrogen, as on-site production. Nitrogen is widely used in the food and beverage industry, chemical and petrochemical, electronics, aerospace, metal works and laser cutting, Oil&Gas, and in general industry. As Nitrogen supply is critical for most industries, SYSADVANCE NITROGEN PSAs incorporate several engineering features designed to allow continuous operation 24×7 for more than 10 years, namely the protected packaging of CMS inside the columns, CMS from first grade suppliers, controlled flow as well as start-up and shut-down cycles. A special proprietary PSA cycle allow for the optimization of the Air Factor (Nitrogen Flow/Air consumption) featuring the most energy efficient and reliable PSA systems on the market.

Following the innovative drive of the company, SYSADVANCE was the first to develop a “Variable Cycle PSA” – VARIO system, which allow the PSA to adapt its cycle to the actual Nitrogen demand of the client’s process, resulting in savings on air consumption up to 50%, when clients have oscilating Nitrogen consumption profiles. Another innovation is the DEOXO system, allowing for the production of Ultra-pure (< 1ppm residual Oxygen) Nitrogen, by the injection of a small flow of Hidrogen in a 99,5% flow of Nitrogen, resulting on the production of pure Nitrogen in a very cost effective process.

The deep knowledge of SYSADVANCE engineering team concerning the application of Nitrogen in each industry, along with its PSA’s track record of quality and reliability, have been the key factors for adoption of SYSADVANCE’s NITROGEN PSA’s, by well know multi-national companies, including the very demanding Oil&Gas companies.

In addition to the Nitrogen Generator product line, SYSADVANCE features a wide range of other products, such as Oxygen PSA Generators, including Medical Oxygen Generators, with certified versions under European 93/42 EC Medical Device Directive, as well as Medical air and Medical vacuum systems and Oxygen VSA’s, the later having energy specific usage lower than 0.4 KW/Nm3.

In the purification area, METHAGEN systems allow for purification of Biogas, removing CO2, N2 and O2 and concentrating Methane from approximately 50% up to 99%, thus generating an equivalent to Natural Gas, for Grid Injection or Vehicle fueling. Another proprietary and patent-pending purification technology recently developed by SYSADVANCE is the HELISYS system – Helium purification and recovery units, for industries performing leak tests or cyclic usage of Helium.

Sysadvance has been in the market for 15 years, providing cost saving technologies for its customer worldwide. Today, sysadvance positions itself as a complete solution provider in the gas purification field; In the forthcoming years the company expects to increase its involvement in large size custom engineering projects, while reinforcing its global market position with its industrial product line.

Find more of our news 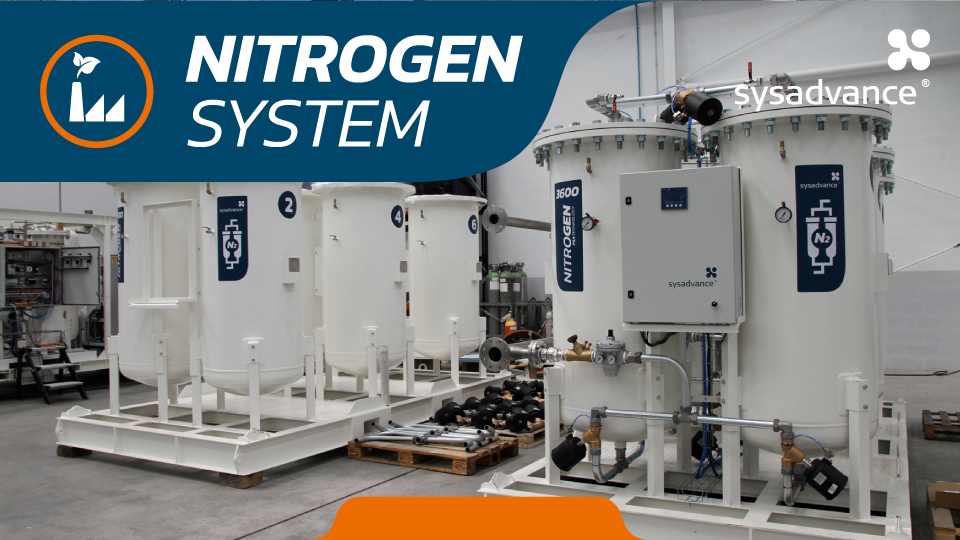 Yesterday, Dourogás injected for the first time, biomethane in the Portuguese natural gas grid, allowing it to reach homes and industries. A successful partnership, where